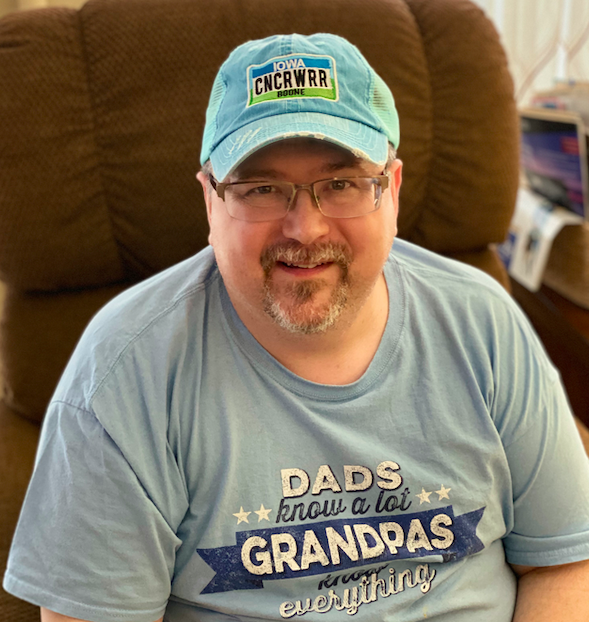 My second visit to my oncologist was setup on September 13th in order to take nine additional labs and and develop a treatment plan. The labs included a wide spectrum of sources blood, urine and bone marrow would be analyzed, some onsite in Bettendorf and some sent to Iowa City in order to determine if the initial staging diagnosis was correct.

Bone marrow marrow cytometry was used to determine if my plasma cells formed a plasma cell neoplasm (it had) and a genetic test called FISH “Fluorescence in situ hybridization” was employed to  map genetic material determining what mutations exist such as additions, deletions, cell swaps.

In the same way that pulling an SD card or a flash drive from a computer while it is being read from or written to, genetic mutations that add, remove or modify genes is the fundamental cause behind multiple myeloma. Six of the eight tests performed in the FISH analysis came back abnormal.

After labs ran, we agreed that the treatment plan should be aggressive. Given my age and physical fortitude, today I can mount a fight many others who are well into their seventies or eighties couldn’t tolerate. I would be a candidate for a bone marrow transplant.

During the physical exam we discussed pain management and ways we could control pain. We also started specialty paperwork approval for a frontline therapy drug which has resulted in thousands of malformed babies. At one time there were only seven pharmacies in the United States that could ship lenalidomide, and each dose was over $500. Today while still very controlled the costs have improved and it has proven to be effective in a war on Multiple Myeloma. I competed pages of paperwork for the drug manufacture, interview questions about this drug which would require monthly counseling by a pharmacist, and an application to register with the manufacturer.

The last comment my oncologist made was that I should consider having a full spine MRI scheduled. I shared that had already scheduled one for the next day with the aid of my pain doctor from Genesis who shared her concern. I left that day with a prescription for morphine and tried to put the events behind me.

Saturday morning I would wake in both pain, and panic. My spine and ribs ached. I lost feeling in my hands, and feet. I was shivering uncontrollably and in a cold sweat.

My wife took my temp; only 99.0. We made breakfast and tried to make it through the rest of the morning, and then headed out to the hospital. Immediately upon walking into the hospital I felt woozy and faint. I checked into my appointment and completed my MRI. After the MRI I had little to no control of my body shaking uncontrollably. My legs and arms had a growing purple and blue appearance, in part from Oxygen loss and in part from a response from my blood, which was coagulating in odd ways.

At admin I was 103.5 had two more MRIs and a CT scan, and was ultimately admitted to the hospital with pneumonia. The MRI imaging identified a new mass, one that until this time that had gone undetected in my spine. Earlier just this same week a whole body x-ray identified nothing abnormal, but we learned that MRIs are over 50 times more sensitive than an x-ray for this diagnostic. While the tumor and other ‘diffuse masses’ associated with my disease are often found on MRI, the good news today is that the effects are minor enough they look normal under x-ray imaging.

Eventually I would stay in the hospital that Saturday through Tuesday, get a lot of antibiotics, and started radiation therapy (RT) with a goal to stop the growth of this new tumor. They were able to initiate the radiation therapy at the hospital and make arrangements for daily treatments weekdays leading up to the dates I had planned for Chemotherapy and with minimal impact on my treatment schedule.

It was during this time that I really came to grips with my diagnosis and reality set in. Now that my immediate family had been contacted and informed I now had maybe 100 others I wanted to inform, those who were close to me but not inside that inner circle. I set about sending personal notes and phone calls for those close to me and used social media to share what I had learned in the past 24 to 48 hours.

The days after this event have been a blur. I have completed nearly 10 radiation treatments since, and scheduled Chemotherapy sessions. More on those topics soon.