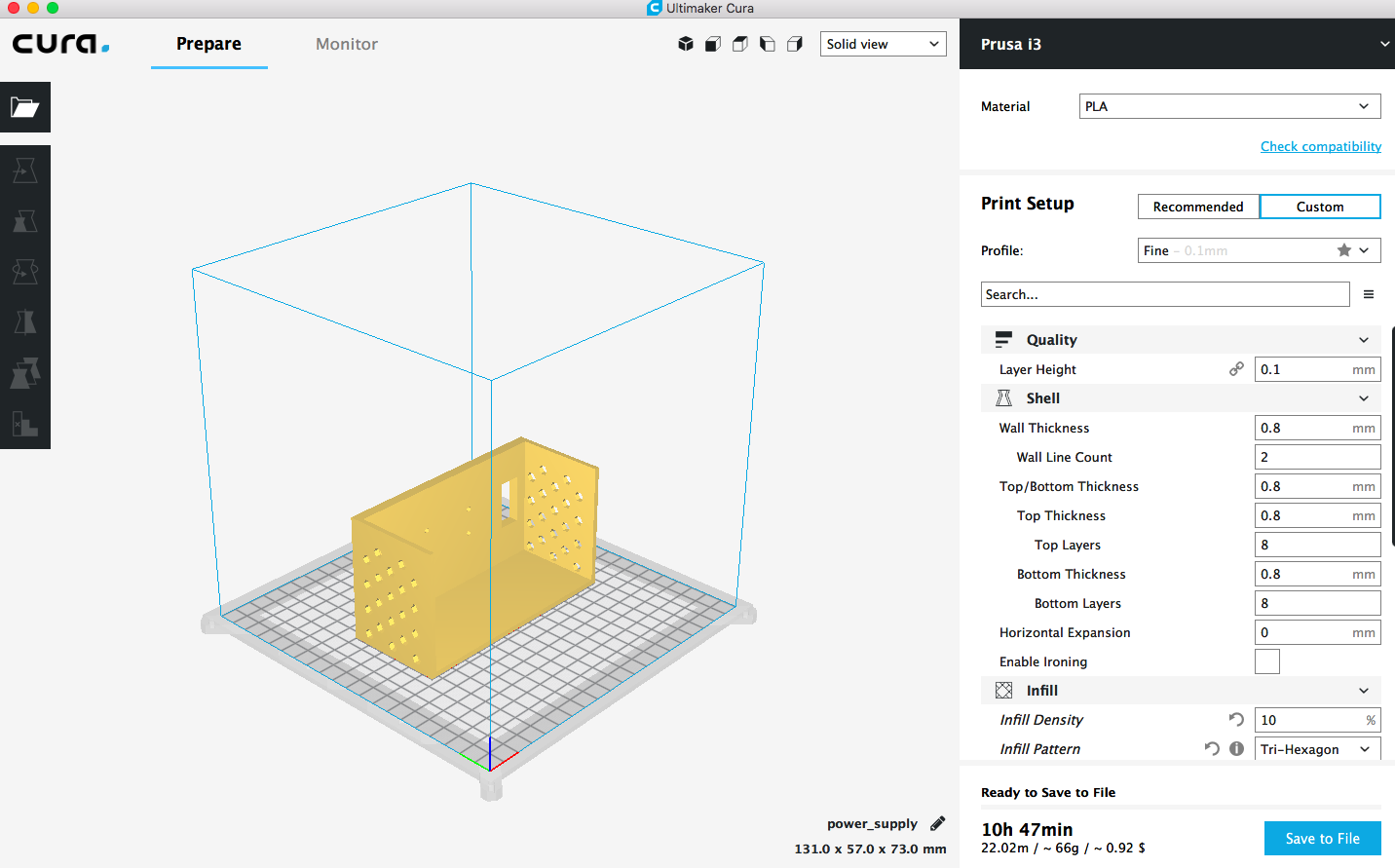 We have all heard about the promise of 3D printing. Some would have you believe that this is the future of all mankind and that in the future everyone will own a 3D printer and print products instead of purchasing them from the store.

I am here to tell you, if that is our future, we are many decades away from it.

3D printing or what is known as “Fused Filament Fabrication” by those in the know, basically squirts a plastic like substance down on a glass plate until it forms a thing. The things are the result of any 3D modeling program that can export in the STL file format. The first step of 3D printing actually starts with someone creating a 3D model. Lucky for you, many have created and share these models in an open community on a popular website called Thingiverse

Once you have a 3D model you use software called a “Slicer” to slice the model into a series of layers that can be deposited layer by layer until your thing emerges. Sounds easy doesn’t it. Easy as one, two, three. No wonder the internet is all abuzz about it calling it the next big thing.

3D printing is admittedly exciting and I have really enjoyed working with one. It feels to me a lot like working with computers in the late seventies. That said, most people I know didn’t use computers in the late seventies, I was one of the very few. There are several reasons for this. Computers were not very powerful, it seemed like we were looking for uses which often included excuses like checkbook and pantry management or education. Computers were terribly difficult to use, they broke a lot, they were brittle in that it took very little to turn your $3500 investment into a door stop. This all sounds a lot like 3D printing today.

I was VERY fortunate to have been gifted a very custom printer by my brother Andy as a graduation gift. Andy knows my technical and mechanical acumen, and so he was confident I was up to the task. After a week I agree that this is an exciting field that appears to be growing. I look forward to pioneering the platform along with him, but I have to tell anyone considering a 3D printer, it is not for the faint of heart.

My training started with my visit to pickup the printer. We were both short on time and so I got the “throw you in the deep end of the pool – just the facts version”. Here is how you install filament, here is how you change filament and here is how you initiate a print. Loaded it up and took it home and I thought “now what”.

I first learned a little about the parts of a 3D printer. There are four motors that are controlled by a low powered hobby computer like device called an Arduino. Each axis the X, Y and Z axis all have a motor to control them, and the fourth motor controls the feeding of the filament into the printer. I also learned that the filament is actually not plastic but a material called polylatic acid, it is renewable, biodegradable and relatively inexpensive and comes in a variety of colors.

Lastly I learned to expect the unexpected. I have now printed quite a few objects. Frankly I have had more failures than successful prints over the course of the week. I am amazed at the number of ways printing can fail and it seems it never fails the same way twice. In the end I wish I had documented the failures, they might be more interesting than the successful items I have printed.

What did I print so far? Prints include many iPhone stands, lots of 45 adapters, a bust of batman, a few carabiners, some blocks used to calibrate the printer, an orange peeler, and maybe a few other similar items.

In that time I had a lot of prints that were ripped from the base where things are printed due to adhesion issues, I had a wiring harness burn up that required some technical redesign, and I had a lot of errors due to default placement of the model on the build platform. After each failure I would perform an analysis, do some troubleshooting, make some modifications and try, try again. Generally when I reprinted I solved the issue.

At the end of the week I am totally hooked. I really enjoy working with the material and the hardware and I know that things will get better, but I am also looking forward to another 30 years of improvements. Maybe in 30 years 3D printing will find its “Killer App”, that thing that we all need so badly we purchase one, but until then, I am out there pioneering.

Hopefully I can share a few ideas on the topic from time to time.